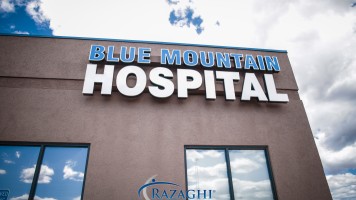 BLANDING, Utah, Jan. 8, 2007 — Blue Mountain Hospital announced it has secured a $14.6 million debt financing from US Bank to construct a critical access hospital in Blanding, Utah. The funds will be used to purchase tax-exempt bonds issued by the city of Blanding with all proceeds being used to construct and equip the state-of-the-art facility. U.S. Department of Housing and Urban Development issued mortgage insurance to US Bank for $14.6 million under the Federal Housing Administration Section 242 Hospital Insurance program for rural Critical Access Hospitals.

The remainder of the $23.1 million was raised through a combination of subordinated debt, private equity, land donations, and lines of credit. “This project required the coordinated efforts and resources from several public and private entities, all of which played a critical role, to secure the necessary capital needed to build this facility,” stated Ahmad Razaghi, President and Chairman of Blue Mountain Hospital. “Blue Mountain Hospital is the culmination of a historic partnership between the Ute Mountain Ute Tribe, Utah Navajo Health Systems and the city of Blanding to service the healthcare needs of all the residents of the Four Corners region who have had limited access to or simply done without adequate healthcare for far too long,” said Manuel Morgan, Chairman of Utah Navajo Health System. “Our process will serve as the template for similar communities that seek to elevate or update their healthcare infrastructure.”

[This press release was originally published on January 8th, 2007 on PRNewswire.com]