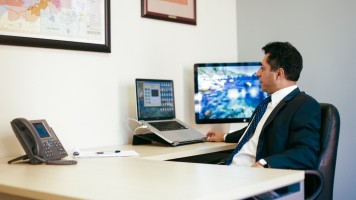 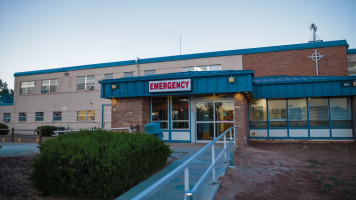 Ahmad Razaghi, President and CEO of Razaghi Healthcare, continues to support the collaboration with the Ute Mountain Ute Tribe and Utah Navajo Health Systems (UNHS). By Donation Agreement dated December 18, 2002, Razaghi donated $505,221 in professional development services and land to Blue Mountain Hospital.  Razaghi said, “We are proud of what Blue Mountain Hospital has achieved, and we look forward to continuing our relationship with the Ute Mountain Utes, the Utah Navajos, and the local communities.”

Razaghi was one of the original founders of what is now Blue Mountain Hospital, located in Blanding, Utah.  During the ten-year development of the project, he was instrumental in structuring a historic collaboration between a private entrepreneur, a Native American tribe, and a tribal organization. As a result, Razaghi holds the right to appoint one member to the Board of Directors of Blue Mountain Hospital. On October 19, 2006, Eagle World News reported, “The monumental partnership between Ute Mountain Ute Tribe, Utah Navajo Health Systems and Razaghi Development Company, et al is the first of its kind to provide healthcare services to the diverse population of Four Corners region…”

Razaghi Healthcare is the leading provider of executive management and consulting services that improve the quality of health care in Native American healthcare systems.

This article was originally published on April 16, 2014 under the headline “Razaghi Healthcare Continues Partnership with Utes and Utah Navajo.” At the request of Blue Mountain Hospital, the article has been edited for content and republished.

After publishing the original version of this press release, Razaghi Healthcare was contacted by The Gallup Independent requesting comments to the following list of questions:

1.      The news release refers to a partnership with Utah Navajo Health Systems. Was this a past partnership to start Blue Mountain Hospital or does it continue today?

The collaboration between Razaghi, the Ute Mountain Ute Tribe, and Utah Navajo Health System (“UNHS”) was formed to facilitate the construction of BMH and create a non-profit organization for the purpose of providing medical care for the Utah Navajo People and surrounding communities. Razaghi’s collaborative partnership with the Ute Mountain Ute Tribe and UNHS continues today.

2.      The news release refers to $600,000 in donated services. What services were donated and when? Were they donated to UNHS or to Blue Mountain?

The correct amount of Razaghi’s donation to BMH is $505,221, which is the sum of $442,635 in professional services Razaghi donated and $62,586, which is the value of the 1.5 acres of land he donated. He made his donation by a Donation Agreement dated December 18, 2002 between Razaghi and BMH. The services Razaghi donated to BMH were project development services he had rendered or would render from March 1, 1996 throughDecember 31, 2002.  Razaghi Healthcare (“RH”) will soon issue an edited press release clarifying the facts about the donation, which Razaghi made to BMH, not to UNHS.

3.      I understand that Ahmad Razaghi was a founding member of the hospital and that he arranged financing for the project. Correct?

As the executive officer of BMH, Razaghi was responsible for the development and implementation of a strategic plan for a de novo hospital in Blanding, UT, including without limitation: business plan; negotiations with a Native tribe and a tribal organization; formation of the corporation; retention and oversight of legal counsel, architect, general contractor and other professionals; land acquisition; market and financial feasibility studies; negotiations with the federal, State of Utah, San Juan County, and Blanding City governments; and financing.

4.      From an earlier news release, he is described as construction manager. What did that involve? Did he have previous experience?

See #3 above. Mr. Razaghi has over 20 years of entrepreneurial and executive management experience.

With the exception of negotiations with a tribal organization, prior to BMH (April 1998 to August 2002), his experience included providing executive leadership (Vice President and later President) in a similar capacity for the Blue Mountain Medical Center, a proposed hospital in Blanding, UT.

He started his career with a construction management/environmental technology company and later became its Vice President (1994 to 1998) where among other things he provided consulting services for the development of a surgical center in Blanding, UT; he was also a founder and board member of a wireless technology company, a founder of a real estate holding company, and has provided consulting services for high tech startup companies in the U.S. and Europe.

5.      The release mentions that RHC will appoint a board member of the hospital. Has he chosen the board member?

Razaghi and RH have found an outstanding candidate for the BMH Board position whom Razaghi will appoint soon. Razaghi, not RH, is entitled to appoint one member of BMH’s Board. An upcoming press release will provideadditional information on this selection.

Razaghi no longer has any business relationships with Manuel Morgan but they remain friends. (Please note the spelling of Mr. Morgan’s first name.)

7.      Did Mr. Razaghi’s duties end when the hospital hired a CEO or did he continue to work with the new CEO?

Razaghi’s duties did not end when BMH hired a Chief Executive Officer. Until July 2010, Razaghi remained President of BMH in charge of the development project while the new CEO was in charge of BMH’s business operations.